The learning method of tunisian language 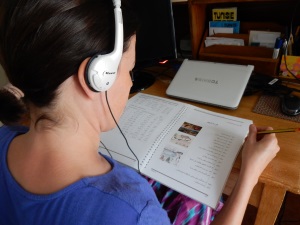 The learning method of tunisian language is intended to beginner level.

It is written both in arabic and transcript for a francophone and anglophone people, what is quite unique. This method was written by Sister Madeleine Prim. 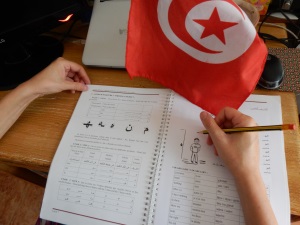 This method is the product of a long story.

After some lessons given by The White Fathers at IBLA ( Institut des Belles Lettres Arabes) , the White Sisters have organized a first draft copy of lessons more intensive in 1937. Since 1957, the language center works in its current form, under the name of ” Maison d’Etudes” , based in Monfleury / Tunis and linked to a library intended to highschool’s pupils.

Initially intended to the White Sister who was studying literal arabic and arabic dialect, with an formation on islamology, the center has opened gradually towards another public living and working in Tunis. The first student was a doctor who felt the major need to speak in arabic with his patients. Thus, since more half an century, the purpose is double : Teaching arabic language to foreign people and giving a formation on the topic of Tunisian Culture. 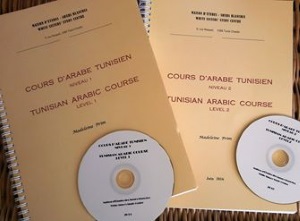 Today, persons are coming from diverse backgrounds : students, entrepreneurs, teachers, academics, spouse of Tunisian citizens . Since a few time, there is a request from a little bit older people coming in Tunisia for their retirement. This means that people are coming from a public very diversified and international. ( Europe, Asia, Africa, America…)

To learn , the effort is oriented right away on the accuracy of the pronunciation, of writing in arabic , and on memorization of structural and usual sentences. Its purpose is to provide the indispensible basic structure in a way which is both progressive and pedagogic. Repetition is an important element into the steps of teaching. A CD – Rom is given with the method in order to facilitate memorization of brief dialogues and short stories that lead on to simple conversations, greetings and the conventional phrases used in Tunisian society.

One of the goal is to facilitate the adaptation to the country, come into connections with people, in details of daily life – going to the grocery-… this effort of learning for the purpose of encountering other people in the daily life is right away appreciate and an absolute joy from both sides. Speak with another person in his own language, this is changing the entire relationship !

Cardinal Lavigerie told his first missionaries: “Learning the language of a people is preparing to belong to him” and he also told them “the miracle of Pentecost was fulfilled only once, since then, it is the effort that make it up” .

With the deep desire to destroy the walls, to erase the bounderies built by ignorance, prejudices, fear of the other different, we want to engage ourselves for a plural and brotherhood society. Thus, we try to achieve God’s plan, Father of all of us, who associate us to the creation of a better world where Love would have the first place and Peace will regn ….