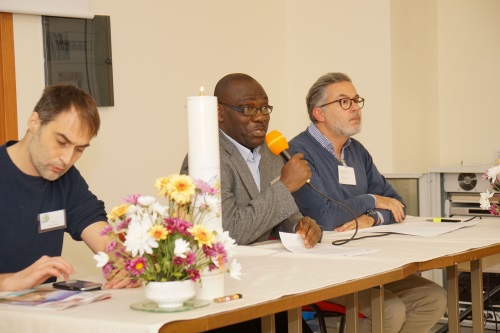 a network of forty-eight religious Congregations working for economic justice between Africa and Europe, held its Annual General Meeting (AGM) on 10th November, 2017. Thirty Religious men and women from around twenty member-Congregations gathered together at the Generalate of the Missionaries of Africa to listen to reports from the Secretariat in Brussels and the Executive Committee, and to enhance the work of AEFJN.

Fr. François de Paul Houngue, SMA, the president of AEFJN, reported on the work done by the Executive Committee. One of the mandates from the last AGM was the promotion and creation of Antennas in Africa. The Executive Committee explored possibilities and now in Central African Republic and DR Congo, initial activities of the Antennas started which is in regular contact with the Secretariat. Fr. François expressed two present needs: new members in the Executive Committee and that every member-Congregation would pay its financial contribution. Lastly, he thanked the outgoing Executive Committee members, Sr. Rebecca Sepepka SUSC and Sr. Denise Bangn’a OLA, for their long passionate commitment. 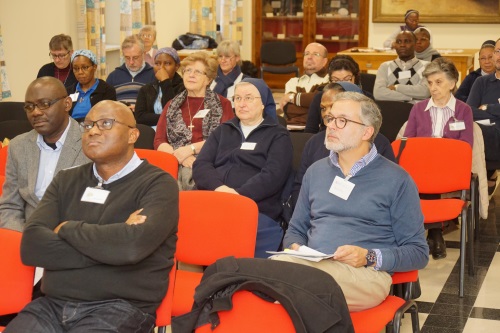 Fr. Chika Onyejiuwa, CSSp, Mr. José Luis Gutierrez Aranda and Mr. Gino Brunswijck from the Secretariat reported some success stories of the network’s advocacy in collaboration with other civil society organization in line with the priorities of the Network, namely Food Sovereignty, Land Grabbing, Trade, Natural Resources and Raw Materials. A good example is the mining case in Koudiadiène, Senegal, which is destroying the environment and ignoring the socio-economic rights of the local people. For three years, research, dialogue, publications and advocacy work has been done, in collaboration with the Madrid Antenna, until finally the mining company promised to be more sensitive to the issues raised and have been providing clean water, medicine, an ambulance, promoting women and providing job-training for young people.
A contact person asked a question, “How we can be more involved?” Fr. Chika invited the member-Congregations to participate in the activities of Antennas both in Africa and Europe which play a major role in the work of the Network.

Sr. Loredana Dalla Libera, CMS, shared about the Italian Antenna. She joined Sr. Francesca Sekli, PSA, who has been working for the Antenna many years. They are inviting the member-Congregations to join the Antenna.

Fr. Daisuke Narui, SVD presented the minor revisions made in the Statutes and By-laws and they were approved. Fr. Chika requested the Assembly to collaborate in the process of the preparation for the Action Plan 2019 – 2023. Lastly, Sr. Estela Parmisano, SSpS presented the financial account and the budget for 2018, and they were approved. She then explained how the Executive foresees the financial situation for coming years, and called for contributions.

The AGM was a good opportunity to learn about the work of the Executive Committee, the Secretariat and the Antennas, as well as to deepen the friendship and engagement of those who are working in and supporting AEFJN. We thank all the participants for their commitment (it was a day of general strike for public transportation!) and their sense of sharing the common mission as the Network.