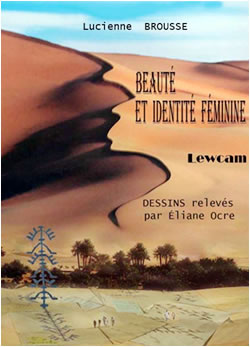 “The art of tattooing as an attribute of feminine beauty was once the prerogative of North African women.

As in all millennial civilizations, this pageantry which embellished the features of the face, the limbs or certain parts of the body formed the adornment of the woman following the example of its current practice in European countries with piercing, a new contemporary form inherited Hindo-Asian civilizations which today attracts casual and rebellious young people.

The work which has just been published by Dar El Khattab editions looks with a corpus of signs, symbols drawn on the origins of Berber female tattoos in the regions of Biskra and Touggourt, spreading a little more in the regions of Kabylie, to provide a modest study that attempts an ethnographic understanding of the original symbolism of tattoos, often referring to testimonies of women who practiced it: “It is moreover the great merit of Lucienne Brousse to reveal this aspect, exceptional as well as little known of our intangible heritage. The set of tattoos that Lucienne gives to contemplate in her book is a precious cultural testimony as much as a strong homage to Maghrebian femininity”, writes Sabah Ferdi, researcher at the CNRA in the preface of the book.

lucienne brousse The author of Toulouse origin, has been established in Algeria since 1953. Retired for a few years, she had a long experience as a pedagogue since she holds a degree in Arabic Letters. Her long career in teaching, she naturally focused on the knowledge of spoken languages, she therefore collaborated in the creation of an audio-visual method for learning Algerian Arabic as well as a formatting of the new method of Tamazight. She is also the author of the spoken Arabic translation of The Little Prince by Antoine de Saint-Exupéry, published in 2008.

In this interesting book, she takes a look full of curiosity and admiration on the tutelary practice of tattooing, the meaning of which has remained unknown, an ancestral art in its own right, the practice of which had begun to fade and disappear in the 1970s. .

This body art from a very distant tradition of tattooing in Algeria, this “kind of writing decipherable by the initiated”, had been practiced for ages by our women, particularly those who had fair complexions. The idea germinated in the mind of our author by examining what she calls “a deposit of trust”, a sort of testamentary work in this collection of drawings representing the statements of the characteristic signs of tattoos with a possible interpretation that she left sister Eliane Ocre before her death, a moral contract which she fulfilled to highlight this art so particular to the North Africans.

“I dedicate this modest contribution to the memory of the heritage of Algeria, to all these women bearing a rich heritage. Even if nowadays, they do not mark the trace of it on their body, they transmit in its rich diversity in all that makes the bottom of “everyday things” by the crafts and the art of today marked by it: weaving, pottery, basketry, embroidery, painting, engraving…” writes Lucienne Brousse in her foreword.

Leaving the reader a written trace by collecting this set of drawings taken by hand on scraps of paper, trying to decipher the deep meaning for a practice that was also current in other civilizations and continents, is certainly to save from oblivion an ancestral practice with multiple functions and wanting to understand a whole anthropology of signs, motifs and symbols that the visual artists of the “Aouchem” pictorial movement had previously wanted to explore. By listing these signs in two categories – simple and complex – and by establishing a possible meaning, the author will seek far and wide the hidden and obscure meaning of these small crosses, these parallel lines, the shape of the M, the crescent moon and the star, palm and palm tree, diamond, etc., to bring out a whole universe of signs whose functionality was proven, according to some testimonies, the author has certainly done useful work.

In this book where everything intersects, such as the materials used to achieve the texture of the tattoo by making incisions on the skin, the attentive reader can easily travel through the photographs and drawings illustrating a paragraph or explaining the boards in what constituted formerly this “art of the body” and which, in many Berber tribes, was not only a cultural mark but on the contrary a means of social communication, of identification with a group or an ethnic group and especially for the Algerian women who followed the technique and the secret processes a real aesthetic of the sign, revealing their beauty or even a talisman to protect them from the evil eye or disease: “The meanings of these symbols can be blurred, there remains like magic, a sense of balance and the beauty of forms”, rightly writes the author of this book. » 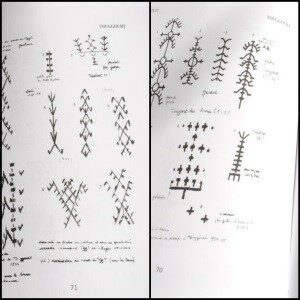