Colourful Carpet of peace and interculturality

What one can do with wasted material like caps, lids, cd’s and old records…. 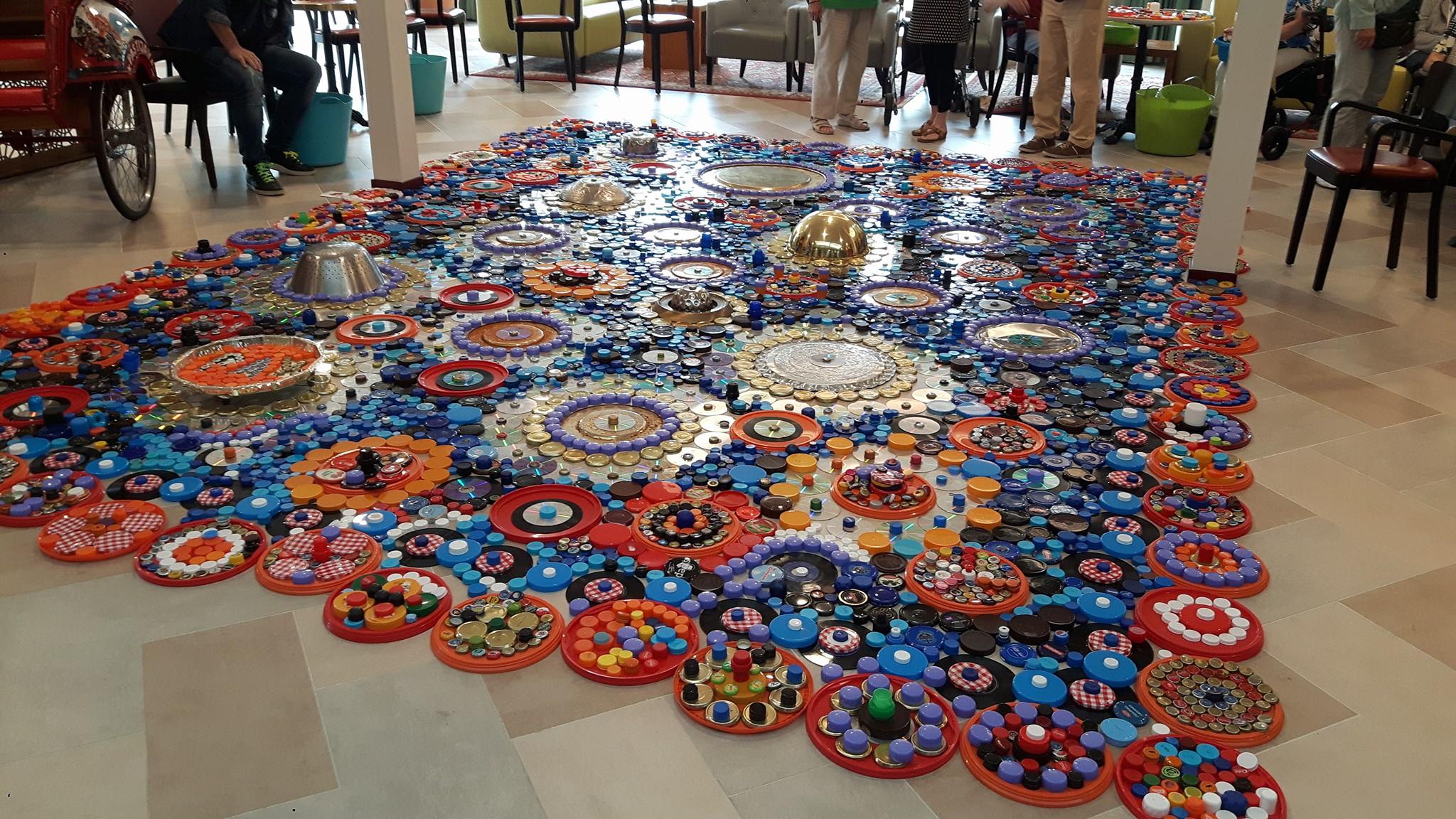 On occasion of the opening of a new house

As an original present for the official opening of the Worldhouse in Boxtel, Missionary Sisters of Our Lady of Africa in the Netherlands  presented an 3-days activity for all residents, staff, volunteers and family members. The opening of the house was last April, but the activity could only be organised in June. So, on the 20th and 21st of June together we built a Carpet of Peace in the lobby of this newly renovated Care home. We were guided by the artist Marianne van Heeswijk, for whom this was already the 30th Carpet of Peace she made with all kinds of people in all kinds of places.

Carpet of peace joining all kind of people 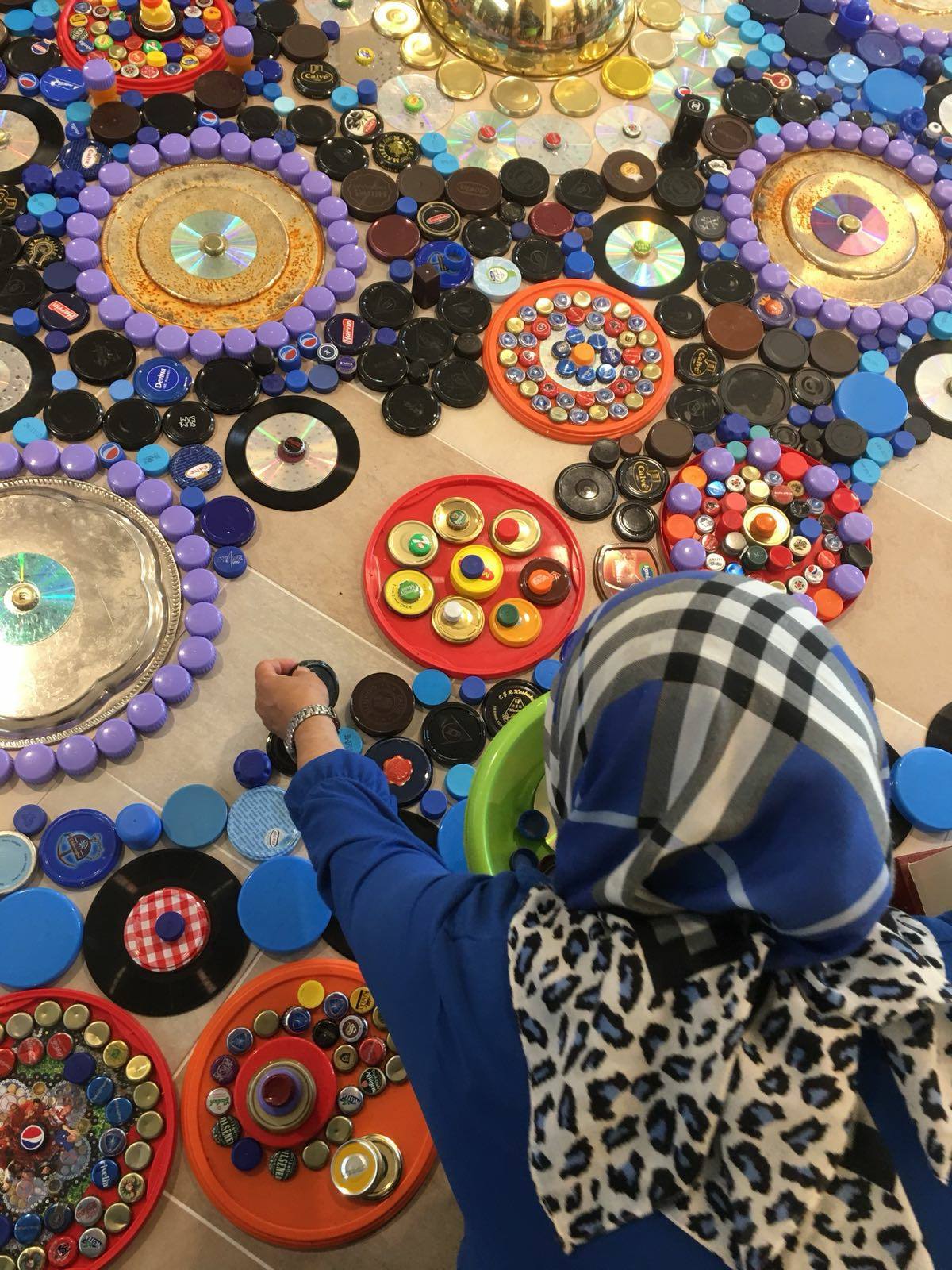 On the top of the refugees crisis in 2015, when many Syrians came to our region, she built the 1st Carpet of Peace together with Syrian asylum seekers and villagers from Maliskamp, a small village close to the refugee camp. After 3 years she is still building unique Carpets, together with migrants, children, homeless people, elderly people and everyone who wants to join. As a statement that, wherever people are coming, they can work, play and live together in an inclusive society. The MSOLA knew this and that’s why they invited her to come to the Worldhouse, where there is also a mixture of people with different cultural and religious backgrounds.

What one can do with wasted caps, lids or CD’s

It was a wonderful first day: many residents came down to lay a lid or cap. The ones who could not kneel anymore or sat in a wheelchair, took a big lid on which they could make their own peace flower. All these lids were used to lay the edges (the sides) of the Carpet. In the middle we put big silver and golden trays and pots from the kitchen as sun, moon and stars. From any point of view in the world, wherever you are, everyone sees the same milkyway and planets.

Also many staff and volunteers joined us and participated enthusiastically. Some residents had saved their own lids and caps, which could be used at once. A little group of White Sisters started spontaneously to make the logo of the Congregation with caps and little flowers, as well as the word Pax and Caritas. The little tables in the lobby where filled with colourful mandala’s. Some people couldn’t stop building, because it is very creative and meditative. Others rather looked how the middle of the Carpet was filled with brown, blue and black lids to present the sky.

So slowly in 2 days this Carpet grew out to be a colourful symbol of world peace and intercultural cooperation. White Sister Gerda Slaghekke and Sefim, an Islamic staffmember, were inspired to read together a text of the famous poet Rumi, before it was time to end the activity. On the 3rd day this incredible Carpet was cleared with the help of some homeless people from a pastoral project nearby, where one of our sisters still works. In half an hour all these thousands of lids, caps, cd’s, records and kitchenware were neatly sorted out, color by color, and back in the big baskets. Ready for another Carpet of Peace……in another place…..with other people.

It was a very joyful experience, although everyone was pretty sad when the Carpet was gone, but luckily we still have the pictures!

www.villavanheeswijk.nl/tapijt-voor-vrede for more Carpets of Peace, also in Ghana!

www.wittezusters.nl for more pictures of the Colourful Carpet of Peace and Connection in the Worldhouse