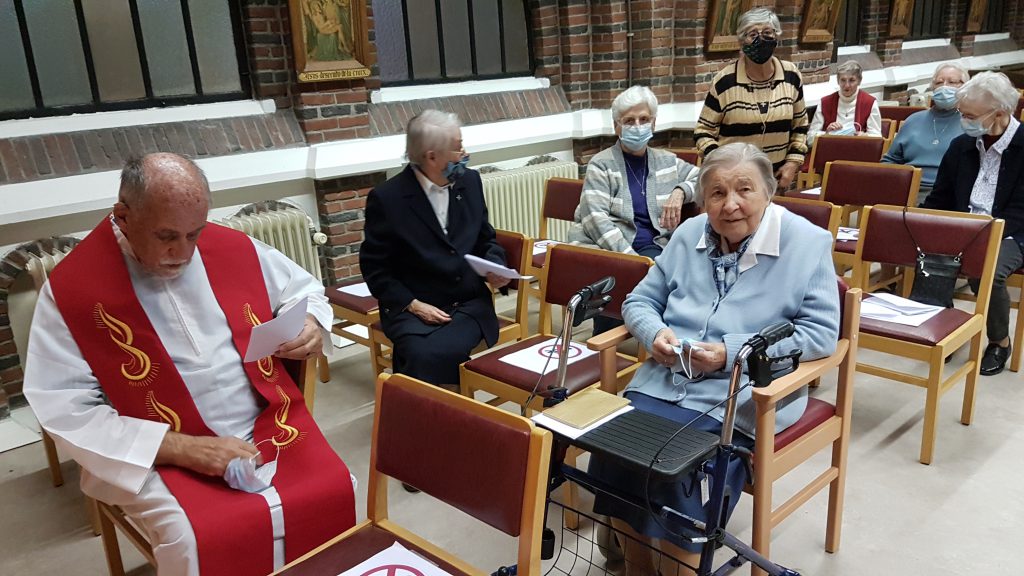 Almost all of my MSOLA formation took place during wartime.
I entered the postulate in Andenne sur Meuse (province of Namur) in April 1943.
Six months later I took the habit at the novitiate of Hérent near Leuven. This lasted 2 years

In the summer of 1944, we suffered a terrible bombardment. We were safe but the windows of the novitiate were shattered. The Sisters, fearing a recurrence, wanted to keep the novices away from Hérent. This is how we were welcomed by the Ursulines of Tildonk for a few weeks. We occupied the premises of the students on vacation. On August 29, we returned home. On September 4, 1944, Brussels was liberated from the occupier. A few days later, our novice mistress, Sr Rose de Viterbe, took us to the village: a convoy carrying allied soldiers was about to pass. The train slowed down and we warmly applauded them.

On September 8, a great event: The 75th year Jubilee of the founding of the Congregation. We celebrated it in simplicity and joy. The novices had prepared a “spoken choir” recounting the origins of the Congregation.
Shortly after, we had the joy of welcoming Mother Claude-Marie, Superior General, for the first time after 5 years!

In the novitiate, there was an entry every six months, which made a good twenty novices. In addition, there were about ten professed sisters, several of whom were waiting for the end of the war to fly to Africa.

From my “caravan” 5 novices made profession on October 28, 1945! It was in May 1948 that I left for Africa – in several stages: first a 3 week stay at the Mother House in Saint-Charles. Sisters who were unable to complete the 2nd year of the novitiate had the privilege of going to Algiers.

The journey continued via Kano in Nigeria then Léopoldville (Kinshasa) in Congo: a stop for a few days. Then by plane again to Kabalo. From there, with a sister we took the train to Kalemie where we had 3 communities. After a few days, we departed to Bujumbura by boat on Lake Tanganyika…. Finally, by car with the vice-provincial, I arrived in Save Rwanda, my first mission in Africa.

We had 2 communities in Save: the one called “mission” for the parish and its inhabitants, the second for the postulate and the novitiate of the Benebikira Sisters. To the buildings of the large convent was added a small teacher-training school, then only intended for the Benebikira. This was where I was going to take my first steps. A few months later, the school opened to other students. I taught there for 15 years in 2 stages. At the beginning of the 1950s, a new school was built which could accommodate 280 students, all boarders, the program was provided by the Ministry of Education. Lay teachers taught with the White Sisters.

At the initiative of certain lay teachers, “clubs” were formed to occupy the students on Wednesday afternoons: sports (volleyball, basketball), singing, theater, even the Legion of Mary. There was also the group of Francinettes (inspired by St Francis of Assisi) In teams of 6-8 students, they would visit elderly people living alone and bring them food (beans, potatoes) that they had grown. crops, firewood, water… They even prepared an “old friend” for Baptism. This was the golden age for school children (the 60s)!

I spent over 40 years in Rwanda, 30 of which were in teaching, mostly in teacher training colleges and 10 in the service of a parish (Kanombe). Forty years interrupted by 4 years of service in Belgium.

In teaching, I had 2 very special years! The 1st, in the post-primary housekeeping school where I gave sewing lessons! The second was at Stella Matutina School in Bujumbura – primary school for European children. I was in charge of a class of 44 1st year primary pupils. Oh memories!

The training of young Rwandan girls has given clear results! How many women have held important positions in the administration, even 2 Prime Ministers. My 10 years in Kanombe were spent in the service of the parish, a very special parish! Kanombe is the seat of a large military camp. At that time, along with military families, it numbered around 3,000 people.

Near the camp had grown a so-called “outside-customary” district with small shops, bars (well attended) etc … Finally, further on, were the original inhabitants of the region in the middle of their land.  All these people formed the parish.

A community of White Sisters had been asked by the religious and military authorities to take care of the wives of the military (maternity, housekeeping courses) and for the works of the parish, especially catechesis. Truly it was life in the midst and at the service of the people of God. The military chaplain acted as parish priest to bring together this diverse world.

This meant that my task was very varied: recruitment and formation of catechists, extracurricular catechesis for around a hundred schoolchildren preparing for Baptism and/or Confirmation, catechesis and literacy for adolescents who did not attend school, Caritas for the poor of the surroundings, maintenance of the church, etc …

Everything changed on Wednesday April 6, 1994 with the attack on the presidential plane in Kanombe. It was the start of the horrible genocide. So many friends and their families were massacred …

The war had already been raging for more than 3 years in the north of the country. This time it reached the whole country. Tens of thousands of people fled to the Congo. For us it was the end of our apostolate in Kanombe. On April 11 we left this place for good. We left everything behind us. A soldier on duty at the airport said this as a farewell word to us: “You will have to come back; we still need you!” Two of the sisters younger than me returned but not to Kanombe.

For me, a new life was to begin. After a year of service in the province of Belgium, I was appointed to St Marc (in Namur). A community of White Sisters was there mainly to welcome the Sisters on leave. I stayed there for 7 years. We participated in the works of the parish especially by being part of the “visitors to the sick.” Some sisters had their apostolate in Namur, literacy training, welcoming the homeless.

It was in St Marc, at the request of Sr. Bijundi Bashige, that I worked at length on the history of the White Sister communities in Rwanda from the first foundation in Save (1909) to the present day. To complete this work, I benefited from a 3 week stay in Rome to consult the archives; this was in 1998.

Four years later, I joined the community that had been established in the convent of the Ursulines of Namur. I stayed there for 12 wonderful years during which we were able to share with them the liturgy, midday meals, their Congregation feasts …

In May 2015, a new appointment to the St Joseph Home in Evere, a municipality in Brussels.
This is where I just celebrated my 75 years of religious profession: 1945-2020… an alabaster jubilee, it seems! Due to the pandemic, the celebration did not go entirely as planned.
The previous day, the chaplain came to tell us: “Tomorrow, no Mass”

The Fathers were confined because one of their own was suspected of having the COVID.

So on the morning of October 28, we followed the Mass in Paris offered by the KTO. Then the traditional aperitif only with the community. Our Evere Green Assisted Living Sisters were not allowed to attend (except for Sr. Mado Closset who had special permission). But, around noon, the Chaplain came to say: “We are deconfined; I will celebrate Mass at 4:00 p.m. (A most beautiful Thanksgiving!)

My whole life with MSOLA can be summed up in 19 appointments without counting shorter stays in certain communities such as the 6 months spent in St Charles in 1960 for the Tertianship.

Here at St Joseph, I am waiting for the 20th, the one that will be everlasting.