A Look at the Women of Africa

After spending many years in West Africa, and living in several communities in France, Marie-Vincente Brouca is now at the St Charles Retirement Home in Verrières-le-Buisson.

With ever sparkling eyes, she tells us about her missionary life in Mali and Burkina Faso.

As soon as I arrived in Bamako, I marvelled at the beauty of the Malian women! In the years that followed, I had the chance to work with them, in a Social Center teaching French and embroidery. In fact, they taught me much more than I knew myself. Among them were Muslim women, much freer than in North Africa and some Christian women.

Then I was sent to an African Congregation to train young women in religious life. There, although they only had a few rudiments of French, I saw that they knew how to live and express themselves, not to mention their faith which amazed me.

Then I left for another African Congregation which was beginning to form. It was the time of the great famine in the Sahel. I am still marked by the courage of these women to live in terribly difficult situations, such as cultivating under the full sun. “We don’t even know when it will grow, because we are waiting for the rain which does not fall.” 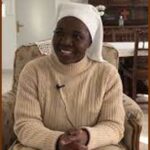 I also discovered families who welcomed me with immense respect, who invited me to harvest with them, but who made me wait until 6 o’clock in the evening before going to help them, because they knew I couldn’t bear the sun.

I worked with dynamic Christian communities, deeply believing people who were not afraid to walk for miles to attend mass.

Finally, among the girls I met several full of faith, who wanted to bring the Gospel to their people in the small villages of the region.

This is what they did, little by little, to form a now flourishing Congregation. These are the women who help other women. They initiate them not only on the religious level, but also in teaching, housekeeping, and some notions of health-care. 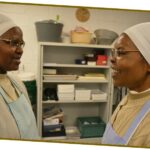 Certainly, they are now in turn, women of the country with their sisters of the country. This was indeed the desire of our founder, Cardinal Lavigerie, wishing that the Africans themselves would take charge of themselves.

It is thus in humility and trust, that we have lived our mission day by day.