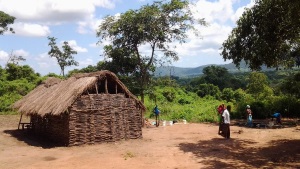 As for me, I do not have a great devotion for cemeteries,

but would go to his tomb each time I returned to Ipusukilo.

In 1950, I arrived in Ipusukilo, Northern Rhodesia, Zambia. As a good White Sister, the first thing to do was to learn the Bemba language. My teacher, (at that time there were no language courses), was Sister Séraphine, one of the four Sisters of the first caravan of Sisters to arrive in Northern Rhodesia. In the afternoon, I went to Lubilo village to practice speaking with Gabrieli Kawimbe. 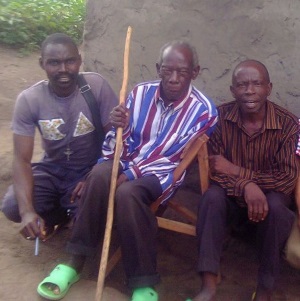 Holding the hand of a patient, or of a dying person: this act makes all the difference.

Old Gabrieli had understood this.Gabrieli was an elderly man. I found him still seated on his deck-chair made of animal skins and reciting his rosary. He had been one of the first catechists of Bishop (Moto-Moto) Dupont, the Bishop King of the Brigands. (Read the book. It is well worth it!) Gabrieli was by now retired, but the flame of the love of the Lord was still bright within him. Every time there was a sick person in the region, often at a distance, Gabrieli would take his stick and would go to pray with him or her or prepare them to pass to the other side…

One day, on the eve of the Feast of the Sacred Heart, I was passing in the villages to bring the news of the Feast of the next day to the minds of the people, at the Mass. Arriving in Gabrieli’s village, I was told he was very ill. I went to see him, lying on his mat in the house, burning up with fever. He only said one thing to me, ‘I wish to receive Mfumu (the King),’ – to receive Communion. I quickly returned to the mission to tell Father A. Gravel, who set off immediately. He found him on his knees. Father Gravel told him to lie down. ‘No,’ he replied, ‘it is for my King!’ The Father brought him Communion every day. For three days, I went to visit him, without progress. 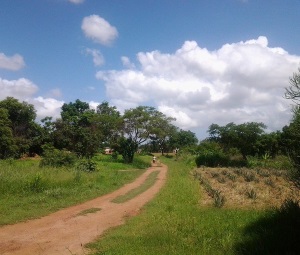 Then I had to leave for a fortnight’s trip of 55km by bicycle. Gabrieli passed away in my absence! I was saddened.

I was unable to return to Ipusukilo; there were all those groups of children, of youth for the catechism classes. However, a crowd of people went from where I was. They walked the 55km for the burial with a patch of white cloth as the sign of mourning. Three days afterwards, they returned bringing news of the funeral. People had come from the entire region, forming a huge crowd; there were rifle shots into the air, as for a chief. Gabrieli died sad at heart: his only son was living with a woman without being married. Some months after his father’s death, he married! Is this a first miracle? As for me, I do not have a great devotion for cemeteries, but would go to his tomb each time I returned to Ipusukilo.
Sister Geneviève Delucenay, community of Villeurbanne, France.