Martyrdom of Saints Perpetua and Felicite 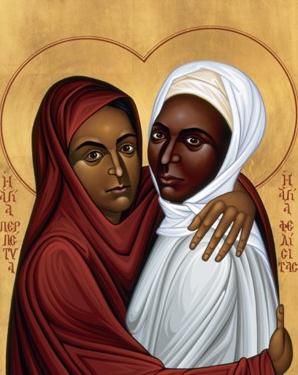 “One day” says Perpetua, “while we were having lunch, they suddenly took us for questioning.

We arrived at the forum. The rumor soon spread to neighboring districts and there was a huge crowd. We were mounted on the platform. My companions, interrogated first, made their confession. When my turn came, my father was there with my son.

He pulled me from the stairs begging: ‘Have mercy on your son.’
Hilarianus, the procurator said: ‘Spare the gray hairs of thy father, spare the tender age of your son; sacrifice out of reverence for the emperors.’
I said, ‘I will not do it.’
Hilarianus asked: ‘Are you Christian?’
I said, ‘I am.’
When my father came up close to convince me, he was chased away by order of Hilarianus and struck with a rod. I felt the blow to my father as if I myself had received it. I suffered for his unhappy old age.

Then came the sentence and we were all condemned to the beasts. Overjoyed, we went down to the dungeon “… 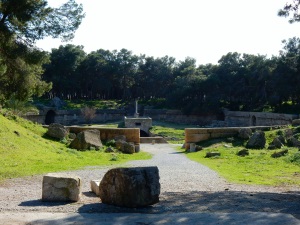 As for Felicite, the grace of the Lord favored her.

As she was in her eighth month, she lamented loudly as the games approached thinking that her martyrdom might be postponed … Her companions were equally saddened at the thought of leaving her alone–such a good companion on the way to their common hope. So united in one lamentation, they sent their prayers to the Lord on the third day before the events. No sooner had they finished their prayer she was taken by the pain. As she moaned suffering from premature birth, one of the jailers told her: “If you moan now what will you do when exposed to the beasts that you despised when you refused to sacrifice?” She replied, “What I suffer today, I will suffer for myself, because I too have to suffer for it.” So she gave birth to a daughter whom a sister raised as her own child …

The day finally came when the martyrs would be victorious and they went out of the prison to advance towards the amphitheater as if they were in heaven. They had happy and radiant faces, and they trembled, from joy not from fear ….

For the young women, they had prepared a furious cow …

Perpetua was thrown into the air and fell. As soon as she could sit, she brought her torn tunic closer about her, more concerned about modesty than pain. Then, she sought a comb for her hair; it was not appropriate in fact, for a woman to be martyred with loose hair, nor to walk slowly mourning her glory. Then she got up and seeing that Felicite had been thrown to the ground, she approached, took her by the hand and helped her to recover. Both remained standing. The cruelty of the people subsided and they were made to go out the door of the Living …

But the people demanded that the martyrs be in the middle of the arena so they could beeyewitness to their killing by seeing the sword sink into their bodies. So they themselves stood up and went where the people wanted them. But first they gave one another a kiss of peace. All received a blow of the sword, still and silent … When Perpetua had to experience the pain: struck between the ribs, she shrieked. Then, as the hand of the beginner gladiator hesitated, she pushed it herself to her throat.

No doubt such a woman could not be put to death differently — she whom the evil spirit feared: she herself had to will it.