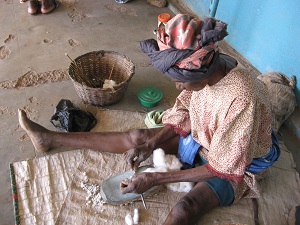 Delwende is a welcoming center for women who have been falsely accused of witchcraft and driven from their families and villages. The center has existed since 1966; it is directed by the Missionary Sisters of Our Lady of Africa. Delwende is a moore word which can be translated “in the hands of God.”

Since the center opened, many awareness efforts have been made by our sisters in collaboration with the local church, especially the Archdiocese of Ouagadougou, the National Justice and Peace Commission of Burkina Faso, the Association of Welfare and National Solidarity, and many other people of good will. We all broadcast this cry: “Stop social exclusion!” 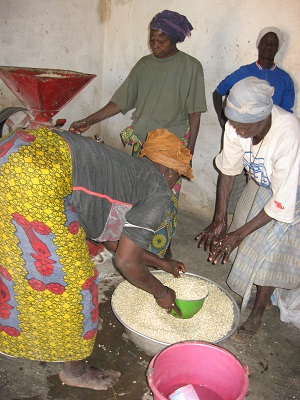 Some signs of change show that we are moving in the right direction.

One morning in February 2013, a 27-year old man came to Delwende in search of his mother, after a forced separation of 22 years! He was five when his mother was driven from her village. He came now to get her to live with him and his new family, his wife and daughter. The tradition does not allow his mother to return to the village. Thus, they will live in Ouagadougou where he has a home and work. It is certain that whatever happens, a child cannot forget his mother or the mother forget her child. This woman is so happy despite everything she has been through.

Another happy day when a few years after the death of her husband, a widow had just found her stepmother in Ouagadougou. The old woman had spent 22 years in Delwende, but she was so happy to go with her stepdaughter! Yet that same day, we received a new woman driven from her village. It seems we take two steps forward and one back, but we keep our hope alive.

At first, people were afraid of the women living in the center, but now many are coming to buy their cotton, seeds and vegetables and to sell various commodities. 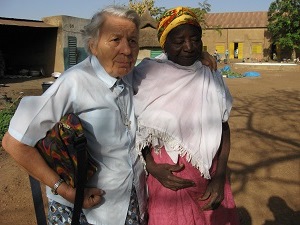 The mission of the Missionary Sisters of Our Lady of Africa in Delwende:

We take every opportunity to denounce the exclusion experienced by these women accused of witchcraft. At the same time, we strive to improve their living conditions in the center, so that they can regain mental and physical health and find their dignity as women.

Some young people adopt a woman they visit regularly, exchanging gifts with her. We hope that more families will come to get their mothers to return home. For some, there is no hope because they are older and have had no contact with their families for decades.

How to change attitudes, cultural beliefs that permeate minds so deeply?
How to reach youth so these horrible habits might change?
How to tackle poverty and provide financial assistance to poor families so that widows are not abandoned, while her only son is abroad in search of a better life?

Here, many young people go to Ivory Coast to find a job. When they return, they find that their mother was expelled and that she died in exile. Their land has been taken over by the extended family.

Sister Hortência Sizalande, in charge of Delwende Centre
Missionary Sister of Our Lady of Africa, from Mozambique and missionary in Burkina Faso