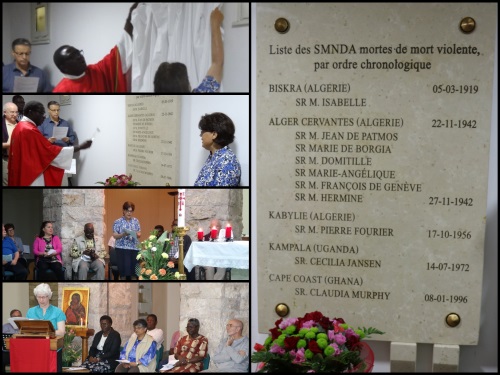 Today we come to remember our sisters who lived their consecration to the end and died a violent death.

We want to be inspired by their fidelity and the gift of their lives.

Pope Francis during the ceremony to commemorate the modern martyrs at the Church of St Bartolomeo in Rome in April 2017, said: “How often, in difficult moments of history, have we heard it said: ‘Today our country needs heroes’? Likewise, we can ask, ‘Today, what does our Church need?’ Martyrs, witnesses, that is, everyday saints of ordinary life, lives lived coherently.” We are all called to this.

“But we also need those who have the courage to accept the grace to be witnesses until the end, until death. Martyrs are the witnesses who carry forward the Church; those who witness to the fact that Jesus is risen, that Jesus is alive, who witness to Him with coherent lives and with the strength of the Holy Spirit they have received as a gift.”
Indeed this appeal is for all of us and is well expressed in our Constitutions, as it has been in all of our Rules since the beginning of our Congregation:

“The love of Christ urges us”
And gives us strength to live the paradoxes of our mission:
Dispossession or enrichment, readiness to leave or to remain.
This love also leads us to become all to all and to recoil before no hardship,
Not even death itself, to help bring about the Kingdom of God.
(Constitutions of 1981, N° 9)

This text, written for us by the hand of the Founder in 1874, has remained in all the successive editions of our Constitutions, also those of 1981, N ° 9. Our predecessors drew from it strength, courage and zeal.

Among our predecessors, we remember this evening the ten sisters whose names appear on this stone: 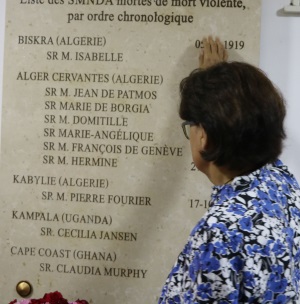 On March 5, 1919 in Biskra, in the Sahara, Sr. Isabelle was sewing. This was part of the service our sisters gave to the military hospital in Biskra. A soldier of the Senegalese division of the French army, a sick man, was able to seize the rifle of a guard and fire at the sister. The two did not know each other.

Sr. Jean de Patmos, Sr. Marie Angélique, Sr. Domitille, Sr. Marie Borgia, Sr. François de Geneve, and Sr. Hermine formed a team of the ophthalmological clinic in Algiers Cervantes. In November 1942, in the middle of the war, the allies landed in Morocco and Algeria and the Germans bombed these new strategic points, Algiers being one of them. On the evening of November 22, 1942, when all the sisters of the community were assembled in the chapel, a bomb exploded before the Tabernacle, killing five sisters, and seriously wounding the sixth, Sr. Hermine who died on November 27. 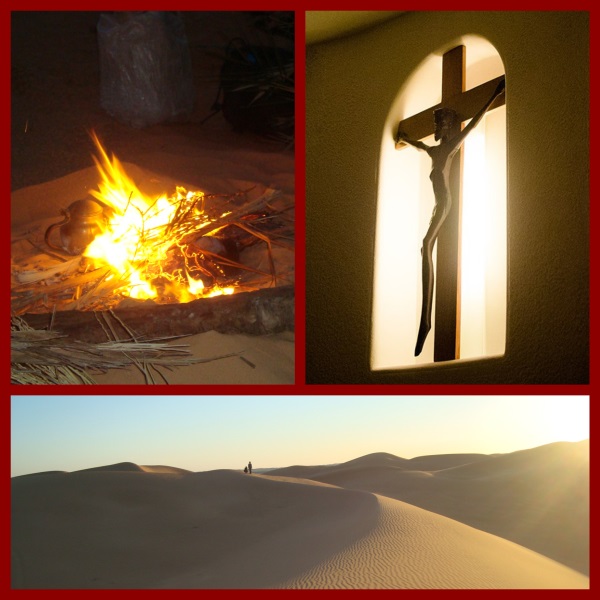 On the morning of September 13, 1956, in the village of Ighil-Ali in Kabylia, the “nursing sisters” were asked to look after a sick child. Sr. Pierre Fourier left with Sr. François Solano (who is still alive, in Canada). They were taken to the outskirts of the village and taken hostage. They spent thirty-four days in captivity in the mountains. In mid- October, there was a hope of returning to Ighil-Ali, with an escort through the mountain … The following day, October 16 they fell into an ambush, and spent a whole day under attack… Sr. Pierre Fourier was struck by several bullets …

Sr. Cecilia Jansen died in Kampala following an attack by a car thief. It was in her role as a nurse that the accident occurred on June 22, 1972 as she was taking a patient from Villa Maria to the hospital in Kampala. Then, in front of the medical office a man approached and asked for the car keys. Sr. Cecilia did not take him seriously and refused. It was then that he shot her. She was immediately taken to the hospital and was given the best care. She died on July14th. 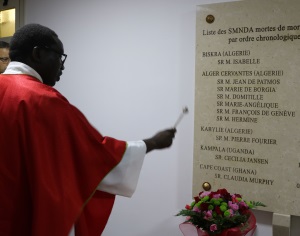 In early January 1996, Sr. Claudia Murphy was on vacation in Cape Coast, Ghana with Patricia, a friend. On January 8, around 5 pm, they decided to go to the beach. While her companion left for a few moments, Claudia sat reading a book. A young man (drugged, mentally ill, nobody knows) accosted Claudia and gave three machete blows in back of her head; Death was almost instantaneous. His companion rushed in and is killed the man in turn.
Claudia was the oldest of the ten, she was 65 years old with 34 years of profession. On the eve of her first vows she had written: “I have little to offer, but I offer my whole person, with the firm will to be all to God.”

More than a simple “memento mori”, a reminder of death, we want to celebrate these life offerings, this firm will of our sisters to be all to God (and to others). That is where their life and our lives are today, because we have offered all our lives to God, and from their example we draw strength, courage and zeal.

And their lives touch other lives …

Two years ago I received an e-mail from Mrs. Demelza in England who had learned that her great-aunt was one of our sisters. It was Sr. Marie Borgia (Frances Wilkinson), who 30 years old was the youngest of the group that died in the bombardment of Algiers. She was a doctor and had converted from Anglicanism. Not sure of her way in life, she was making a retreat with a Missionary of Africa and then decided to give her life for the mission. Her decision was very badly taken by the family and she could no longer show herself there.

Two weeks ago Demelza wrote to me again and she sent me three photos of Sister Marie Borgia, happy that these photos had been kept while much of the life of this young woman had been erased. She continued “Frances’ father was a doctor himself and for nearly 20 years was trying to eradicate the plague among the poor people of Punjab in India. Is it not sad that someone who has spent his life helping others could be so hard against his own daughter, who, in his own way has continued her work?”

“I am proud of the courage and spirit of Sister Marie Borgia. Before my children were born, I worked for 12 years for Amnesty International in Asia to protect the oppressed in dangerous places. I did not know Sister Marie Borgia at that time, but looking back I see what inspired my work. I hope that my children, too, will be strong to live their values and convictions when they grow up. “

May we all draw strength, courage and zeal from the lives of our sisters and brothers
who have preceded us on the road to martyrdom.
May we humbly offer our lives to God and receive from him the grace of witness, even to death.
May our lives touch others and encourage them to witness. Thank you.