In Rome, on 26th of January 2019, as part of the commemorations of the Jubilee Year of our Foundation and of that of the Missionaries of Africa, Cardinal Filoni, Prefect of the Congregation for the Evangelization of Peoples, presided over a Solemn Mass in the Saint Louis des Français Church where Cardinal Charles Lavigerie our founder was ordained Bishop in March 1863.

Many of our sisters serving or studying in Italy were present, among them sisters of the General Council, the community of Rome, and sisters in the Juniorate.  The Missionaries of Africa too were represented in a large number. Members of different congregations and lay people joined our feast: brothers and sisters whom we know through different groups, secretaries, bursars and archivists, our workers and our employees of whom some came with their families. Seeing so many Congregations, mostly missionaries like us, we had a strong sense of the huge network that we religious build within the Church. And, our mission is the mission of the Church, it’s never just us.

The Mass was made colourful thanks to the choir of the Congolese Chaplaincy in Rome lead by a Jesuit priest and others who study sacred music. Some of our Sisters joined them and put on the uniform.

In His homily, the Cardinal retraced the developments in Mission theology reminding that the whole Church is missionary. He also took up the words of Pope Francis: “Don’t let yourselves be robbed of the Gospel! Don’t let yourselves be robbed of your missionary strength!” The proclamation of the Gospel is still the role of the Lavigerie family, the Spirit still is calling prophets. 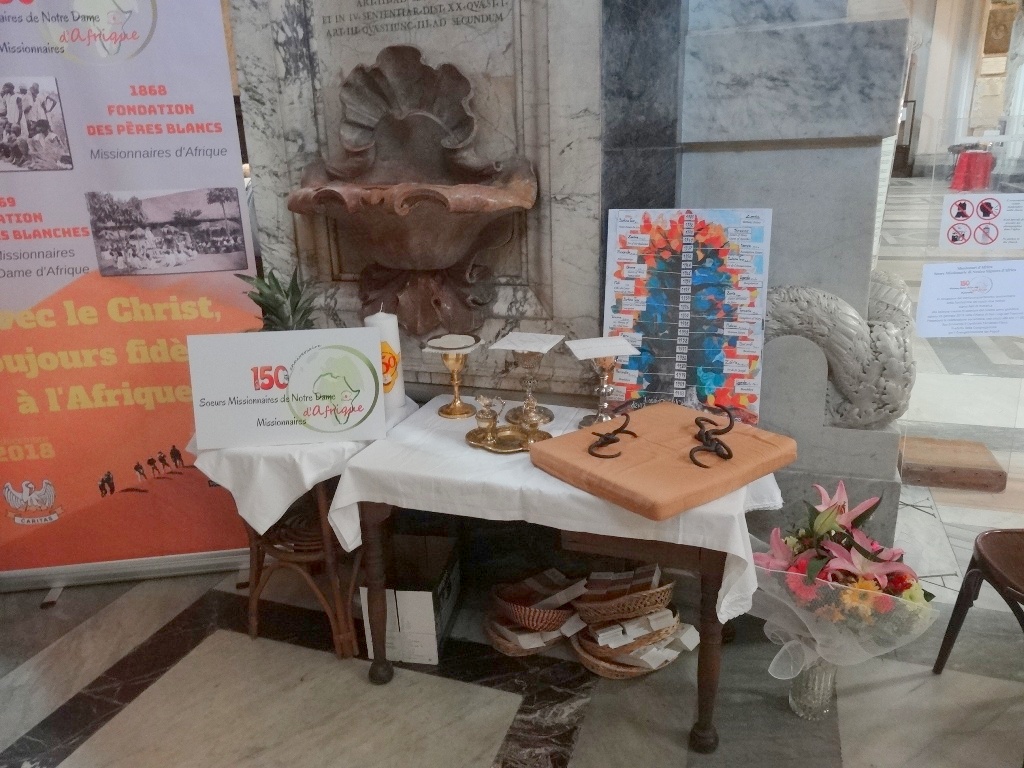 In the offertory procession we brought symbols that are important for us: the Logo of the Jubilee, the chains of the Martyrs of Uganda, the candle decorated by the Sisters of the Work in the Generalate of the Missionaries of Africa, the tree of Congregations founded by our two institutes, flowers, fruits, bread and wine and the two chalices of Fr Livinhac and Fr Voillard, Missionaries of Africa. The palls used during Mass were embroidered in North African style reminding of our role as women apostles among women. During the consecration, Cardinal Filoni was using the chalice of Cardinal Lavigerie that we keep in our Generalate.

On the occasion of our 150 years Jubilee, a commemorative plaque in memory of Cardinal Lavigerie our Founder was placed in the Saint Louis des Français Church.

Sister Carmen Sammut, our Superior General gave an introduction speech in which she underlined that “our origins were a huge invitation. In 1868 and 1869 the first candidates, men and women, arrived in Algiers. They had heard the invitation to be apostles, to be followers of Jesus sent in his name. They responded to an intuition, without any assurance that it was possible, nor any way of knowing where it would lead them. This intuition and invitation continue to shape our lives today: they are an on-going call to be co-creators with God in building a world that is according to God’s desire for all people.”

The Superior General of the Missionaries of Africa thanked everybody at the end of the celebration.

Gisela Schreyer, Missionary Sister of Our Lady of Africa on mission in Rome, Italy