Meeting of the “Our Lady of Africa Family” 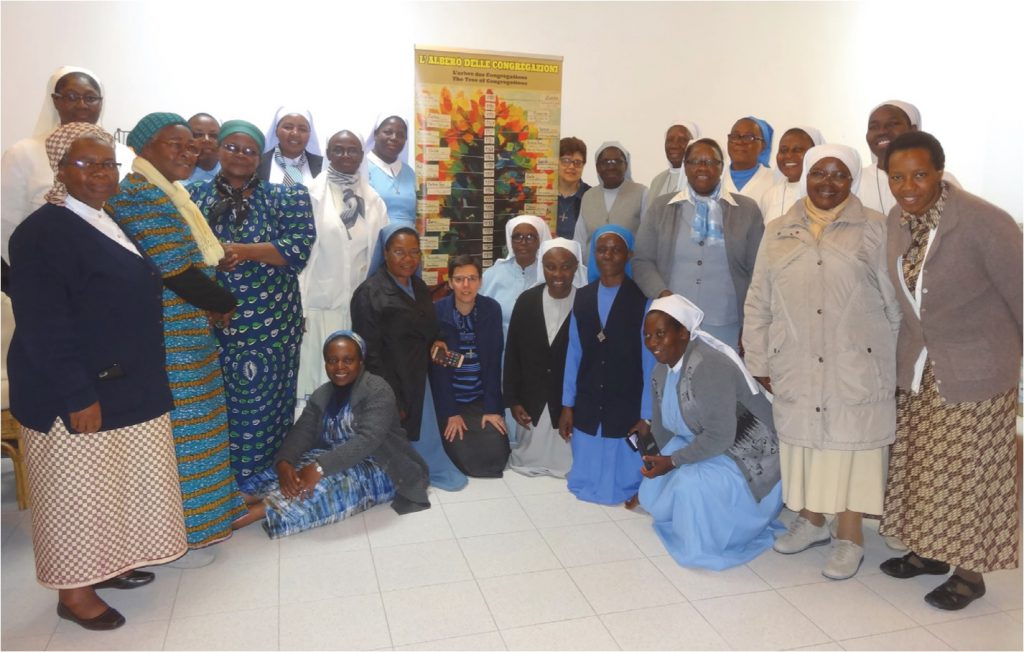 On Saturday, May 11th, 2019, when the Plenary Assembly of the UISG (International Union of Superiors General) was finished, the community of Rome welcomed twenty Superiors General of the ‘Family of Our Lady of Africa’. They spent the day working with the General Council, focusing on various points of common interest.

Looking back on the UISG meeting, which had as its theme ‘Sowers of Prophetic Hope’, many highlighted the awareness they had gained and the concrete commitments already made. Through these, we were equipped to raise awareness on how we can either take care of the environment or destroy it. Some examples of actions were cited: planting trees and reforestation; educate children in our schools to respect and care for creation; make people aware of how to improve their environment, especially regarding forests; support the projects of those who are working for the same cause and collaborate with them.

Dialogue is the new name for charity. There was a new awareness of the possibility of a ‘dialogue of life’ through the apostolate of presence, testifying to Christ in everyday life. This encourages the idea of forming groups that bring Christian and Muslim women together.

The call to a commitment ‘at the peripheries of our societies’ is a call to be involved with migrants, to go to the poor, to leave our ‘comfort zones’, to be sowers of hope by being close to the those who are suffering in many different ways. When a war is over, one finds a great deal of suffering among the children in the schools: they need to be helped to understand the meaning of compassion and reconciliation. This is one of the ways we will be able to witness to the presence of Christ among the poor and make our contribution towards creating a more dignified life.

As we hear about the abuses that have been and are happening in the Church and in society, we have noticed how, most of the time, the abusers gradually gain the trust of the person or even of the community. They are very cunning in that. In the Apostolic Letter issued Motu proprio, ‘You are the light of the world’, that Pope Francis sent to the bishops on May 7th, 2019, he encourages anyone who has witnessed a situation of abuse in the Church to denounce it. Trustworthy people will look into and deal with cases that are reported. This means we have to be attentive to what is going on around us and in our communities, and when we have evidence that something is happening, we have to talk to people who can help. We are called to break the silence and in order to do that, it is important to
sensitize the Sisters, to make them aware that they need to be vigilant and to encourage them to denounce any situations that arise.

Living in a world that has become more and more multicultural, and forming communities whose members are of diverse origins, we see that intercultural living has become a necessity in our Congregations. We are called to share the riches of our cultures more and, faced with the fear of those who are different from ourselves, we are also called to take up certain challenges. For example, some spoke about the difficulties that can arise around Sisters’ funerals and they emphasized the need for a “Congregational culture” in this area. A rich discussion on various experiences followed.

The follow-up of the meeting held in Tanzania in 2018: one Congregation made more use of Ignatian Spirituality in the formation of the novices and some also made an Ignatian retreat of thirty days. At the end of the day, the participants shared on how they had experienced this encounter: One Sister commented, “Being together is like living a new foundation that brings together all the Congregations formed by the MSOLA.” “It is an opportunity to deepen certain aspects of the life of our Congregations,” added another.
The next meeting of the Our Lady of Africa Family will take place in 2022 in Rome, after the Plenary Assembly of the UISG. The next meeting in Africa will be held in 2023 and the venue is yet to be decided upon. Before saying goodbye, the Sisters offered several gifts to our General Council, to mark the 150th anniversary of our founding.

Many thanks to everyone for your mutual enrichment and generosity.
Sr. Mapendo Masirika, Rome, Italy (Partage Trentaprile Sharing 2/2019)