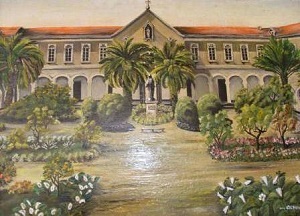 “But where is your Mother House?” Some people ask us. A “Mother House” is normally where a religious congregation was born and where we joyfully return for various reasons (religious professions, general chapters …)

It is well known, the Missionary Sisters of Our Lady of Africa have a nomadic soul!!! Our Mother House is no exception to the rule, as it has undergone many transformations and relocations following the vicissitudes of history!

Our Congregation was born in Algiers in 1869 at the initiative of Msgr. Charles Lavigerie. At the time of his arrival there, a famine plagued the country. He appealed to all people of goodwill on the spot and abroad, to accommodate the many orphans. Where to lodge all these people? First it was in a local district of Ben Aknoun. Then Msgr. Lavigerie acquired a large estate in Kouba. The 300 orphans settled in the house and outbuildings. Lavigerie gave this area the name of his patron saint: Saint Charles.

Since his arrival in Algeria, Msgr. Lavigerie increasingly saw the necessity of a congregation whose way of life would be adapted to the country. He sent Father Le Mauff to Brittany to find “four cornerstones” of the future congregation! Eight young women answered the call and landed in Algiers on 9 September 1869. Lavigerie installed them in Saint Charles. 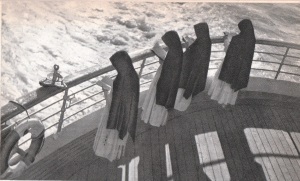 The Mother House was for a long time the center of all activities of the young Congregation: formation house, orphanage, printing, sanatorium, place of residence of the General Council … From Saint Charles, the sisters went to different countries in Africa, from where came infrequent news from the sisters already there in: Tanzania since 1894, Congo since 1895, French Sudan (Mali) since 1897, Uganda since 1899.

Several General Chapters were held at the Mother House. This is also where the second year novices were gathered, coming from Europe and America (France, Belgium, Netherlands, Germany, Switzerland, Luxembourg, Spain, Great Britain, Malta, Canada, USA …) The “caravans” of 30, 40 novices from many nationalities landed in Saint Charles to live an international year before being sent on mission somewhere in Africa.

There was great enthusiasm in the Mother House! Young sisters received courses in Bible, theology … and even Arabic. They were sent on “stage” to communities in Algeria, Kabylia, Sub-Sahara, in the casbah of Algiers …

It was in Saint Charles on October 18, 1930 that the first Superior General died. We could call her our “co-founder” – Mother Marie Salome, from Guisseny Brittany and who guided her boat amid many storms! 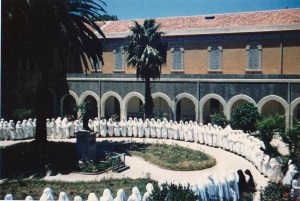 The small congregation founded by Archbishop Lavigerie, has grown. The call to missionary religious life was understood by very many young women. On September 9, 1869 they were eight to leave their native Brittany to begin the fabulous adventure of missionary life in Africa! In 1945 there were 1454 sisters in 160 communities! The period of 1939-1945 was particularly troubled: with the bombing in Algiers, the inability of Sisters scattered around the world to communicate with the Mother House … Over the years and with countries’ independence, it became necessary to transfer the different services of the Mother House to Rome. This became the Generalate (headquarters of the General Council), established in 1964 near Rome, at Frascati.

And Saint Charles? A community of Sisters of St. Augustine had set up a boarding school there. In 1974, the buildings were sold to the Ministry of Health. Our Congregation however, kept a parallel building which became for a time the headquarters of the Province of North Africa.

Saint Charles, Kouba, remains the cradle of the Congregation. During all these years, different generations of Missionary Sisters of Our Lady of Africa have lived great moments of joy, meetings, formation … They also worked very hard there … There were difficult times. It took a lot of flexibility and faith to accept to leave this place that was so dear to us.

As a sister wrote in 1974:
“Faith in the work of the Spirit in the Congregation is more than a slogan … It is in the difficult moments that I realized the strength of a past that deeply roots you in the Mission more than you can imagine.”